Rumba styles of the Flamenco guitar

Rumbas flamencas ... y mas - Rumba techniques of the flamenco guitar. The music book to the DVD of the same name, was nominated for the "digita" 2009. The German Educational Media Award (digita) is a quality award for digital educational media. The Value Pack was also awarded the GPI (Gesellschaft für Pädagogik und Information e.V., Berlin) EduMedia award.

· Standard music notation and tablature / tabs
· 5 Flamenco-Compositions (full transcribed)
· Explanation of all techniques of right and left hand.
· 50 photos of all hand and finger strokes.
· Professional music typographie
· 2 Audio-CDs (All titels in normal and slow version)
· 3 version of every title: all instruments - only solo-guitar - only rhythm-guitar
· Handmade music - no sampled sound.

Look inside with audio samples. 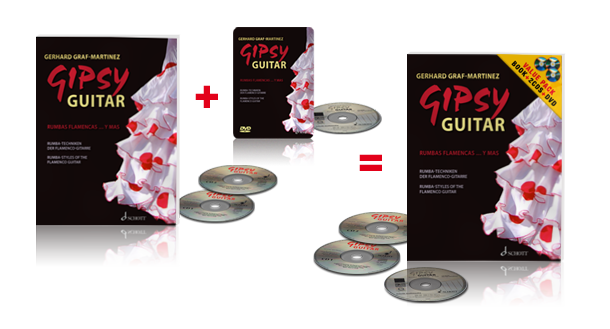 *) mp4 can be played on all devices, smart TV, computer Mac/Win, tablets and smartphones.

There is no right of return or refund for digital products.

The unexpected great success of my two volume Flamenco Guitar Method, which was reflected in the many letters received from within Germany and abroad and in the positive reviews in the specialist publications and flamenco circles, was accompanied with expressions of regret that the Latin American forms, especially the rumba and its derivatives, were not treated in greater depth. However, the Rumba flamenca is a very controversial area. Some do not recognize this music as belonging to Flamenco or dismiss it as a superficial form, while others less involved with Flamenco, regard it as the very embodiment of flamenco music. It should be said that many flamencos outside Spain first came to the higher forms of Flamenco through the rumba. Paco de Lucía had long been recognized as a genius in flamenco circles before he achieved world wide popularity with his legendary compositions Entre Dos Aguas and Rio Ancho which later became Mediterranean Sundance in his duo with Al Di Meola. The Gypsy Kings too, whose rumbas became international hits, did not shy away from confronting their audience with a Fandango Natural in their concerts, and as a result ten thousand or more people were made to listen to real Flamenco, whether they wanted to or not. It is possible to disagree about this kind of multicultural intervention, but it cannot be bad for Flamenco; unless one wishes to ensure that as few people as possible gain access to what is a difficult area of flamenco music, and the circle of those interested is limited to an elite.

Concerning the compositions, many flamenco pieces or falsetas (solo music passages) which were created decades ago are today considered standard works, and it is often impossible to determine who composed which piece. This is partly due to the fact that flamenco music has never been written in music notation or taught and learned through reading music. It could be exactly this situation, however, that has preserved the great flexibility and spontaneity of Flamenco to this day. At the practice stage it may be normal to play a ?falseta? in exactly the same way every time, but once the technical difficulties have been overcome it is unusual to reproduce it in the same form time after time. In the course of time, various aspects such as articulation and phrasing change, and it may even happen that at some time something completely new emerges. This situation, however, proved to be a problem with the compositions in this book. It was not always easy to pin down the form of the falsetas, melodies etc. and to arrange them so that they could be reproduced. It proved especially difficult to play the improvised section in the slow version in the same way as in the original. It was not always possible, nor was it really my intention, to reproduce everything down to the finest detail. I hope you enjoy this book and the accompanying CDs, and hope too that it will advance the afición for Flamenco.